The Workers’ Action Centre and our allies have been organizing for years to raise the minimum wage as well as improve our basic labour standards. Now, the Fight for $15 and Fairness campaign, made up of many labour groups, community organizations and individuals, has become a massive grassroots mobilization. Several victories have been won and we need to keep organizing to fight for decent work and wages. We know that many have now joined us to stop the spread of precarious work and eliminate poverty wages. Download the campaign’s new pledge form, which lists our next set of demands and ask your community to vote for candidates who support workers’ rights. 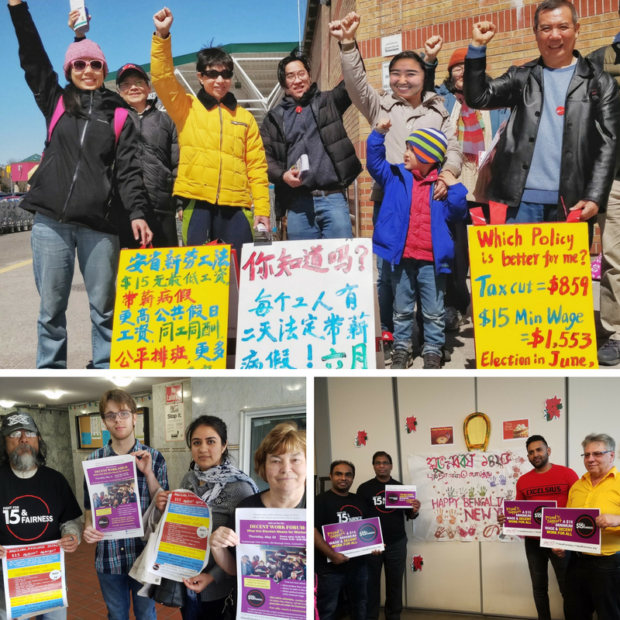 The next 5 weeks are critical for organizing. Big business lobbyists continue to use their scare tactics that business cannot survive without paying poverty wages and having unstable and insecure working conditions. Our political candidates care about business in Ontario, but we must remind them that a business is nothing without its workers. When a candidate knocks on your door to ask for your vote, make sure they are standing up for decent working conditions by asking these Sample Questions.

Let’s take a quick look at where the political parties stand on $15 and Fairness. The Progressive Conservative Party is making minimum-wage workers a promise of no taxes instead of raising the minimum wage to $15 on January 1, 2019. However, many low wage workers don’t pay tax and will benefit a great deal more by a $15 minimum wage.  Furthermore, a tax credit does not address the many other ways in which workers’ rights are both inadequate and frequently violated. The NDP platform includes a $15 minimum wage and three weeks’ paid vacation for all full-time employees, while the Liberal Party is ready to bring in a $15 minimum wage and fairer scheduling rules in 2019. However, there are still many demands of workers left unanswered by all three main parties. That’s why, during the election and afterwards, we need to push for better wages and labour laws no matter who is elected.

Please vote for a candidate that supports a $15 minimum wage and better labour laws! Better yet, encourage others to do the same! Here are some of the ways you can help us campaign for decent work and lives of everyday people working in Ontario: