On Friday June 28, the Ontario Human Rights Tribunal will hold the last hearing on Mr. Ned Livingston Peart’s case.  Mr. Peart, a migrant worker who came to Canada through the Commonwealth Seasonal Agricultural Workers’ Program (CSAWP), was crushed to death in 2002 while working on a tobacco farm near Brantford.  When the Peart family requested a coroner’s inquest into his death their request was denied. 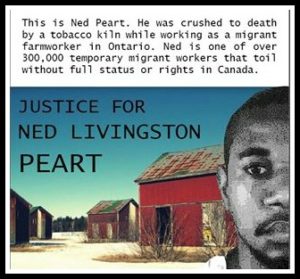 The Office of Chief Coroner had stated that it was satisfied with the police report that the accident was a result of Mr. Peart’s actions and thus no investigation was needed.  With the help of Justicia for Migrant Workers (J4MW), the Peart family continued pushing for a coroner’s inquest to no avail. Finally in 2005 the family and J4MW filed a complaint with the Human Rights Tribunal claiming that the Coroner’s Act was being applied in a discriminatory way with regards to migrant workers, as the province demands mandatory inquests for some workers and excludes others.

According to J4MW the death of a migrant worker has never been the subject of a coroner’s inquest.  CSAWP migrant workers are caught in a cycle of permanent recruitment where they may never obtain citizenship rights or job security. They can be dismissed/repatriated to their home country for any reason without recourse, which can include situations where workers are injured or raise concerns about their safety.

A rally will be held outside the hearing this Friday June 28. Please join us. Visit this site for more information.

WAC is a member of the Migrant Workers Alliance for Change and is active in the fight for stronger rights and protections for all migrant workers.